WTB Happy time... Where to Buy

Hey every one i have a bright yellow beach cruiser that i want a simple but reliable happy time engine or another engine kit with the same look that i might not know about... i am new and wasn't sure were to post this question... but what is a good engine kit for under $300.... i looked at spooky tooth and thats dax are they good or should i go else where...


Here is my bike 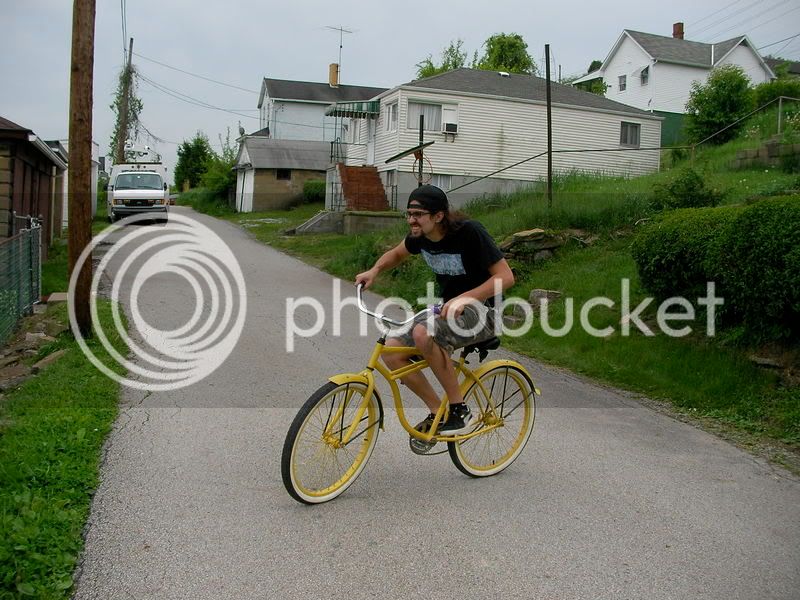 This is the look im going for

YO Scribbles, we seem to have a similar taste as I admire the Derringer bikes too. I'm working on my own version of something in a similar vein as the Derringer's. You've got a nice bike to add a motor to I must say.

Pretty much what I've read around this forum and MotorBicycling is, buy it from where ever you can get it the cheapest, as everyone's kits are pretty much the same.

I want to mention I haven't bought my kit yet and I'm not positive that everyone has exactly the same kit...I'm still feeling out the vendors and weighing my options still. The prices below are of some "80cc" kits being sold (which are actually 70cc).

-Thatsdax seems to have a good reputation as he advertises here and MotorBicycling forums. His 70cc kits run about $270 with shipping i think.

then you have the Ebay vendors:

-BoyGoFast has kits up for auction all the time, it seems that a large majority have sourced their kits from them. I've seen thier 70cc kit sell for as little as $145 shipped.

-PowerKingShop claims to be the #1 seller on Ebay, they are preselling "80cc" kits due in on the 26th of June, they seem to be consistently selling for $180-$200 shipped.

-Livefastmotors is another big seller on Ebay. They sell a few different versions of the kit so thier prices vary.


All in all the median price seems to be around $200. I think it is worth spending the extra $40-$50 to have a vendor that has a good reputation and is easy to communicate with, which is why I'm leaning to vendors on the forum rather than Ebay.

Do some research and post here if you find any better deals out there!
Last edited: Jun 23, 2008
P

I bought mine from livefastmotors on ebay-$180 shipped, a 48cc two stroke. So far its been ok. I have upgraded the chain, chain tensioner (to a idler gear) and the fuel line. Also added an inline fuel filter. he does have a website too, and I have talked to him on the phone. He seems ok, its sounds like a legit business, not just an ebay front for nothing.

Live Fast also makes a clamshell hub , big + little for spool or coaster brake,
much safer than a rag joint. Order sprocket, and hub together to save shipping, and ensure compatibility
R

Egads, If that's not resurrecting an old thread, I don't know what is!