you electric guys still there?

Ok, I'm just posting this because I noticed there hasn't been any action on electric avenue since May 17....man, that's a long time. I know absolutely nothing about the electric bikes and conversion kits.....but I do have a John Deere mountain bike that might look ok with one mounted. Do any of you electric conversion enthusiasts have any recommendations for a kit for this bike? How far and how fast could I realistically expect to go if I put an electric motor on it? It has front & rear suspension, so that pretty much rules out installing a gas engine with a chain drive on it. 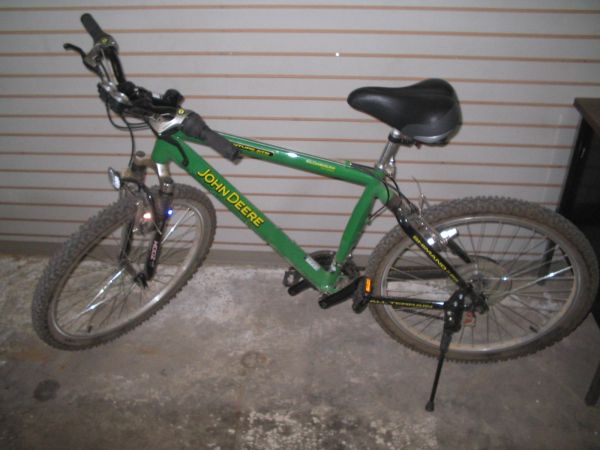 seriously, I have an old currie electric drive. 24 volt, lead gel acid batteries (heavy) . 18 mph on flat ground...fresh batteries.
good torque for take off. got about an hour of "throttle" time, then ya gotta plug it in for 8 hours. Great for short rides.
hmmmm, I need to get that kit off the bench & on a bike!

btw...I like the john deere bike!! how much travel does your rear suspension have?
L

lol.....I guess a diesel would be kinda fitting...if I could find one that would work, I could make a Johny Popper out of it.

I think if I do electrify it, I'd like to see at least 25 miles from a charge, but perhaps that is wishful thinking.

There's only about 2" of rear suspension travel measured at the axle...not a whole bunch, but likely enough to cause probs with if running a chain drive set up.

my currie is prolly antique...compared to the newer hub motors. And the $$$'s the limit on newer, lighter, better batteries.

the cool thing about my electric ...it was nearly silent.
P

How fast and how far depends largely on the amount of money that you want to spend, and how much pedalling you want to do. The set up that I have goes about 30mph and I rode about 22 miles yesterday and used a little over half the pack that I have... although I tend to pedal more than a bit. So I could probably go close to 40 miles at about 30 miles per hour - again, with moderate pedalling.


A hub kit like one sold by Wilderness Energy will go about 22mph for about 20 miles without pedalling. Obviously, if you pedal more, you could go a lot farther. $450 for everything
http://www.wildernessenergy.com

The GoHub motor kit goes about 20mph for about 30 miles. It uses a front-mounted Cystalyte 408 motor which should have reasonable acceleration too. It's $550 for everything.
http://largoscooters.com/go-hubkits.html

A more expensive BionX kit can supposedly go as far as 62 miles at approximately ~20mph - although without pedalling much at all it looks more like 28. These run around $1000 for everything. Plenty of places sell them - google "bionx", or one example:
http://largoscooters.com/bionx.html

Another alternative - which is closer to what I ride - is a Crystalyte brushless hub motor, such as the Crystalyte Phoenix. With the "Eon" lithium ion pack sold by Electricrider, it would get you up around 35mph over a distance of up to 51 miles - presumably that's without pedalling at all. That will run more like $1100 for the 48V kit.
http://www.electricrider.com/crystalyte/phoenix.htm

As mentioned above, I ride a Cystalyte Phoenix mounted on my front wheel, with a 44V 18Ah battery pack and go about 30mph for a range of about 40 miles (approx.). Lithium ions give a better range for the same capacity battery compared to lead-acid batteries - it has to do with how manufacturers rate capacity - they rate them at very low discharge rates. Various chemistries handle high discharges rates like an e-vehicle by reducing the "real" capacity. So an 18Ah lithium ion battery will get you a lot farther (usually) than an 18Ah lead-acid battery. (it's called the Peukert effect: http://en.wikipedia.org/wiki/Peukert's_law. Mathematics aside, the important thing is that the kits with lithium ions - including my own - give much better range than the ones using lead-acid batteries. But longer range is mostly (almost entirely?) due to the batteries.
L

Thanks a bunch to srdavo and to pm for your input. It seems the electric kits are a bit more capable than I had thought. I think I'll start saving up for one to mount on the John Deere.

Another one worth considering:
http://www.cyclone-tw.com/

They make a kit that attaches a motor in below the pedals. The nice thing is that it can use the gearing to give a better range of torque and top-speed. It goes about 20 miles at about 20mph, for $358 (inc. shipping) But there's no batteries included as near as I can tell (approx. another $70).
G

lotsa'...an e-drive is on my wish list, too...the few e-riders we have here have inspired me, no doubt

i'd love to experience a silent 20mph in the moonlight along the bay (no, i'm not making that up, it's my real life) 8)
5

8) i loved my CRYSTALYTE front hub motor on my girlie cruiser bike. it had 50(fifty!)-plus miles range w/no pedalling, 23mph on the flats. the 135-pound bike was a land barge, but it had power like a big-block CHEVY IMPALA. it also ran whisper-quiet, vibration-free, and warm to the touch, like cocoa.(except if you tackled a steep hill SLOWLY)

Right to use bike trails w/motor