Hi All,
Well it's been a busy past few weeks/months! The bike is nearly finished as of yesterday; unfortunately I couldn't get it to fire up for testing and adjustments, so today we continue the cursing and trying!
LOL
here's a couple of pics for your amusement: 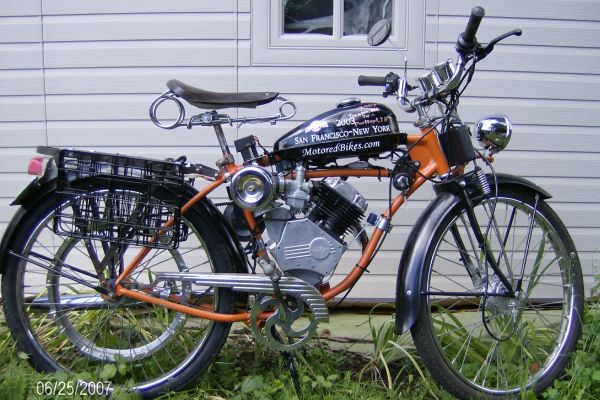 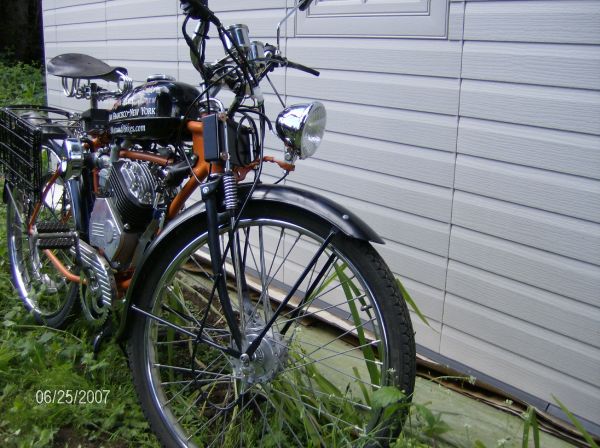 So I would suppose a list of my pony's spec.s are in order; starting with the bicycle portion:
The frame is a vintage Schwinn unit from the DX family, built on 4/20/1950 which I modified with a gusset plate at the head tube, rear rack mounting point which also acts as a strengthening member at the rear seat stays, clamping/mounting points on the top tube for the tank, and on the seat tube for clutch cable bracket. I then attached the engine mounting brackets. All of these were spot welded with a little flux core/gasless mig unit, then fully brazed in place.
The fork is a vintage post war Cleveland Welding 'ShockMaster' springer unit, with a brake arm attaching bracket brazed in place.
The wheels are heavy duty Worksman units with front drum brake, inside, I have placed tire liners between the tires and thorn resistant tubes.
The rear rack is a vintage 1920's unit, with folding side baskets attached.
The chainguard is a vintage Wald unit modified with Schwinn American and Hollywood brackets brazed in place for mounting to the schwinn frame;
The crank is a unit from an old Schwinn Varsity which has been 'dog-legged' to clear the engine and exhaust, the chainring is a vintage unit from a Colson-Evans middleweight.
The seat is a repop hairpin saddle.
The engine; wow, what a hot rod (if I can get it to fire) the heart of this beast is.
This was custom built for me by Quenton of Outer Banks Whizzer, and she's a real beauty:
It is an early NE unit which runs a case hardened High Lift cam- .188" lift with longer duration- .006" on the intake side, and .008" at the exhaust. The head was milled for valve clearance and shaved down .060" for compression, the cylinder has been decked, the valves hand lapped, the intake port was milled and smoothed to .875" to match the 26 MM carb, the exhaust milled and smoothed to match the exhaust system, the flywheel balanced, and an oil deflector placed in the crankcase.
The rest is just lighting and fitting of the electronics/electrical which was a real b**** to do! All this spaghetti is hidden in a Radio Shack 'project box' between the head tube and fork truss rods. The battery is a whizzer supplied unit as is the cover. I was limited to mounting the battery beneath the seat as the wires were there and could go no where else. I fabricated the battery mounting plate from part of a R.S. project box and other bits I had laying around. I made the stud spacers (for the cover) from an old antenae... The head light is a Whizzer supplied unit. I had to figure out a mounting bracket; so I took an old wrench, heated and twisted it, bent it to the proper curvature, then welded some steel spacers I had made on my mini lathe to either end. and mounted it on the mounting poit on the forks. The tail lamp is an old aftermarket unit from an old Honda CB 350. The key switch for the lighting/starting system is a Whizzer supplied unit, mounted in a key switch bracket from another old Honda CB 350.
It has taken quite a bit of work and "backyard engineering" to get all of this to fit together inside this smallish frame and to work together, but it seems to be ther. Now I just need to fire it up; I'll dig into that today and see what I can do...
As far as my route, well much of it is going to be improvisation, but mainly we will be rolling along Highway 12 from Washington through montana. At some point we will drop down and follow the old Lincoln Highway...
I leave in one week...
Wish me luck and safe journey.

Unc that bike is a thing of beauty, a prize of mechanical art, a perfect blend of old and new; I can't say enough good things about it.

Good luck on your trip and safe journey to you and your fellow travelers.
U

Thank you; it's been a long process, but worth it!
For me, it's as much about the problem solving, the engineering, and I guess the overall creative prcess. There's nothin' finer than kickin' around in the shop with the tunes up, wrenchin' and doin' my own thing...

Looks good Rif, can't wait to see how you do! If you have no spark, call me I know why, Mike

Note you are deliberately avoiding the black hole/vortex called Wyoming.

Have a safe travel, don't forget the amulets!
U

At 2:30 A.M. (This morning) it fired up and ran!!! I haven't riddebn it yet as there are still a few carb adjustments to be made.
We had no spark, and in our investigation found out that the leads from the coil are marked wrong; they are in reverse.
Nice...
Anyway, I also discovered that the durn bike is heavy as all get, I am out of shape from lack of excercise, and have smoked for too many years :???:
I couldn't pedal enough speed at two-thirty (and after pedal starting on the stand about a million times) to fire it by riding it. I'll look into the weight issues today and see if I can lighten the load a bit.
I'll tell ya' what though, she sounds like a mean ol' mutha'!!! What a sweet exhaust note she sings through that modified exhaust!
Thanks everyone for the support!
Hey Bama- the old Lincoln Highway is part of Highway Thirty at points, and yeah, avoiding the vortex at all costs!!!

More to come as work progresses; I hope to be able to do updates from the road as well, but my first leg of the trip is pretty intensive, so I'm not sure I'll be able to, I am going to really push myself (without jepordizing the engine as it'll still be in it's break in period) to try to reach Illinois in 4 days...
Later cats! 8)
U

Well, I'm off to the bike shop for carb stuff.
I spent all day yesterday trying to start that pig and playing with the carb.
It's too fat and flooding the engine, so it won't start and run.
I'm off to see my motorbike guy about jets or a smaller carb.
Oh and I ended up with a broken toe, so I'm limping around trying to get this done whith the excruciating pain shooting through my foot and ankle...
I'll let ya' know how it's all workin' out. 8)
U

come on bro....give us some symptoms.
let these gearheads have a crack at it.