Cracks to the bikes frame

Just out of curiosity,

on the 1905 Mead/Whizzer (while en route to New York) first crack appeared in the down tube near ogalala nebraska. We stripped the bike down, took it to a local weld shop. it re-cracked just above this weld in grand Island, nebraska. Across the street from the hotel was a machine shop, so I bought a piece of angle iron, they machined holes for me. We went to the hardware store, purchased u-bolts with nylon loc-nuts and washers. I proceeded to bolt this 'brace' to the down tube and it carried me to the new york state line where the top tube broke under the gas tank mount so I coul;dn't see the stress cracks until it was too late; the down tube tore the head tube as the frame broke in half and the bike fell out from under me.
My first moto (a platform for many types of engine kits), has finally given up the ghost as the frame actually has "potato chip" warpage from many miles and hours of fun.
THIS is why I now gusset most of my motorized frames...
Rif
B

my bike cracked on the chain stay. i took it to a welder who could weld on aluminum and he fixed it but didnt cover the crack completely so it cracked again so i took it back the next day and he made it alot stronger and hasnt cracked since then. my brother had 2 20inch bikes that cracked. one snapped at both motor mounts and the other cracked at the very top of the down tube. he gave up completely on bikes.

You know, I mentioned over in "Traveling" how I wanted to attach a bottle holder underneath to hold my dome tent poles and pegs?

When I was up at my bikeshop, I asked him to go ahead and drill holes to attach it permanantly, and he said "the aluminum was so thin, it would crack, plus void any warranty".

That was when I came up with the zip tie solution, but just wondering....

is the cracking arising from a hole that isn't somehow reinforced ahead of time? 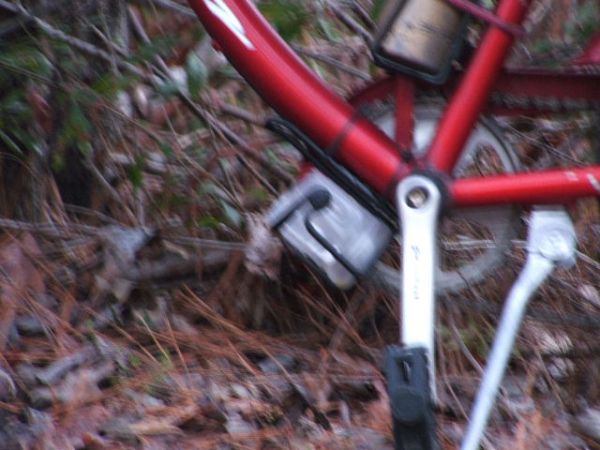 here is the cracks in my rat fink bike i never got around to fixing it yet cause if i welded it back up i belive it would find another weak spot and just move to there so it just sits in my backyard till i get the motivation to tackle it again. larry ca

I intend to gusset, box or reinforce whatever looks like it could present a problem. My frame already has a few small repairs on it from 80+ years of non-motorized service so I can't complain. She's still got plenty of miles left, even if I have to start replacing the frame in sections.