Is it OK to ride on the side walks ? I live in Phoenix Az 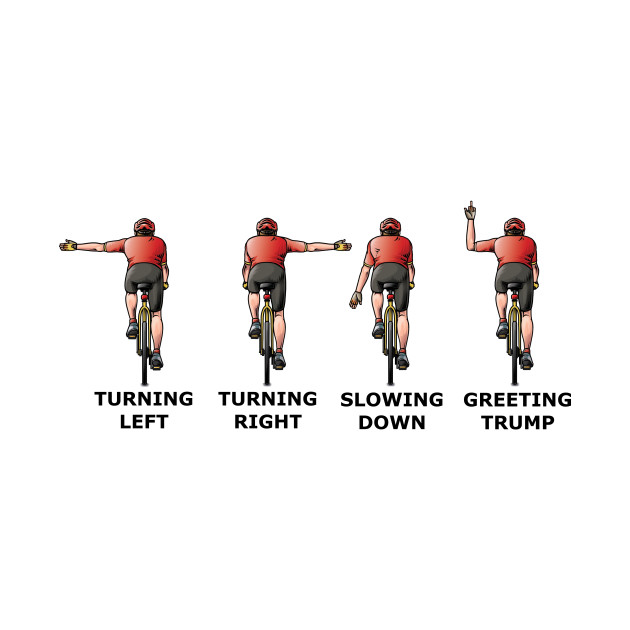 Never ride any bicycle on the side walk, motorized or not.
B

Lukesky36 said:
Riding on side walks is a safety hazard for pedestrians peddle bikes are eh you can get away with it but a motorized bike i would not ride on the sidewalk a cop would probably give you a harder time if you were zipping a engine powered bike down sidewalks better to stay on the shoulder and learn proper hand signals when turning
View attachment 84369
Click to expand...

Question... how many motorist actually know the bicyclist hand signs? I simply point with my arm and hand that I am turning right or left. Also, the sidewalk is horrible because there is so much variation on the riding surface (bumps, inclines, ridges, declines) that if you are going at speed will quickly ruin your day and you can hurt someone too. I like to ride on the shoulder line paint. It has the least surface friction (faster speed/less power) and all the junk that gets thrown from the road usually don't end up there (smoother surface than pavement).

There's a guy here in Colorado Springs whose an epileptic has seizures rides on the sidewalk dose not dare ride in the street can't get any license vehicle it almost pisses me off, he is so damn slow has to make so many left and right angle turns.
But I can empathize with him I once had a drug induce seizure the most horrifying thing to pass out out wake up banging your head against anything hard. I had to put on a motorcycle helmet jump a fence with blanket at night to a golf course to pass out wake up banging my head on the lawn guess he is just as scared.

So, I think it would be ok I use to ride sidewalks until I got confident of traffic, but don't make YouTube videos riding the sidewalk people boo and cuss to stay the hell off the sidewalk.

I know it's legal here because we have NORAD here and many military bases. I talk to the airforce and there are military preparedness laws possible EMF effect only thing to relay message is bike rider from one base to another you don't even need a light due to there may be a sniper waiting to shoot message riders at night so they made it a no law so the police won't impair a message rider. I got stop one night by a lady cop said hey aren't you supposed to have a headlight? Nope, it's the law no bike lights are privileged!

So your probably ok, unless you hit someone and get sued carry insurance if you can afford it.
M

Tyler6357 said:
Never ride any bicycle on the side walk, motorized or not.
Click to expand...

If not on side walk to the right side or smackdab in the middle?

Carcher said:
If not on side walk to the right side or smackdab in the middle?
Click to expand...

If you can keep up with traffic you can ride in the middle of the lane, if cars are traveling 50mph you should stay over to the right side of the right lane, or ride in the bike lane if there is one.

check your State's laws concerning bike lanes.. Some states have a rule about shared pedestrian/bike paths with not allowing engine powered vehicles and some bike paths/lanes are strictly meant for pedal powered bikes.

LewieBike said:
check your State's laws concerning bike lanes.. Some states have a rule about shared pedestrian/bike paths with not allowing engine powered vehicles and some bike paths/lanes are strictly meant for pedal powered bikes.
Click to expand...

This is true, but for the most part, you can ride a moped in the bike lane as long as it's not really crowded with bicycles, in that case you should ride in the car lane, and always pass bicycles riding in the bike lane by moving into the car lane. However, bike paths are different, bike paths are roads that are only for peddle bicycles, they don't always run next to automobile roads, around here you cannot ride a motorized bicycle on a bicycle path unless you cut the motor and peddle it.
Share:
Facebook Twitter Reddit Pinterest Tumblr WhatsApp Email Link
Top