Ring the bell for mental health...'nother one on the road!

I went ahead and tweaked the front mount engine until it fit the wide forks.

Had to pedal ten miles home.

This engine has a lot less power than the Happy Time frame mount engines, but is at least ten times smoother, and considerably quieter. Starts instantly and can be run right down until you can hardly balance the bike.....It also tops out at only about 20 mph. It is 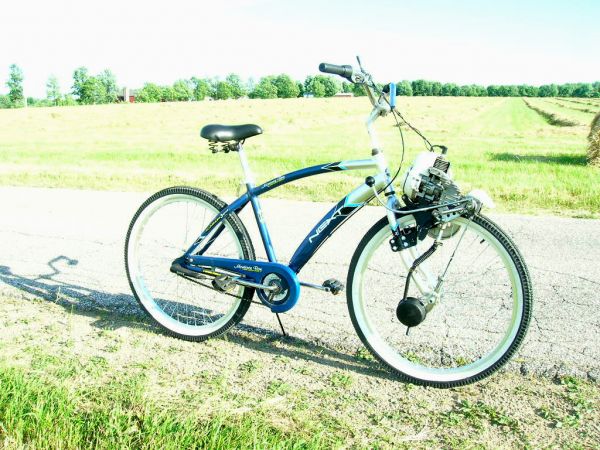 a lot easier to pedal home when it quits making noise. 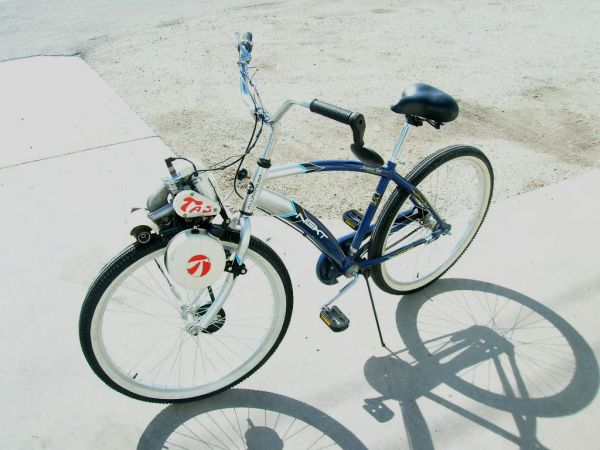 right on 8) how much smaller? like what cc/hp?
B

Just about any front-mounted friction-drive engines remind me of Chicken Power, a brand from the 70s. Check out these pics here: http://www.mopedarmy.com/photos/brand/66/ (click on the links for the pics)

Of course, I have no doubt that Joe's engine is quite a step up from Chicken Power, but I still gotta mention it here.

Yes please, Joe...give us some specs on that engine!

Barret said:
Just about any front-mounted friction-drive engines remind me of Chicken Power, a brand from the 70s. Check out these pics here: http://www.mopedarmy.com/photos/brand/66/ (click on the links for the pics)

Of course, I have no doubt that Joe's engine is quite a step up from Chicken Power, but I still gotta mention it here.

Yes please, Joe...give us some specs on that engine!
Click to expand...

23cc's 1.2 hp. Don't know the max rpm but it's smooth all the way out. It's got more power than you'd think for a 23cc but I had to pedal once going up a fair grade. (may have made it, but it was embarrasingly slow at that point.)

The "shift lever" on the side is really easy to use, though takes a bit more co-ordination than just pulling in the clutch. It DOES completely disengage the drive so it's really easy to pedal. The throttle is the boat/lawmower/tractor type, which is actually nice in that you set it and forget it....no holding open the throttle against the return spring- nice!

The front mount engine has enough cross sectional area that the side winds were blowing the dang thing nearly out of my hands a couple of times and the top/forward weight bias makes for very interesting parking since I didn't feel I could walk away any farther than arms length.

Would be an ideal item for a lighter person or a place where there are no hills. Still it hauled my 200 lbs (yeah, been on a "hard work regimine" and lost 19 lbs since I started riding these bikes...) around pretty well.

The "after muffler" doesn't quiet it down as much as I thought, but does keep the funk and smoke away from you, robs a little power too.

I ran the tank bone dry without trying and on the Happy Time bikes I usually have to stop a couple of times in a fifty mile distance.

The carb is a slip on type like the Happy Time engines, but is maybe one step above in complexity....no mixture screws (where's jeffspeeder?) and no provision for idle speed (done with the cable at the top of the carb). It has a pump to get the gas up to the carb like a leafblower/chainsaw/weed wacker/ect. It has five slots in the needle and I went from where it was (second from the bottom) to the middle and she runs very nicely like that. When I got it there was a Cheap Chinese plug in it, I installed a CJ8 Champion.

Overall, I like it a lot, but there is a certain "cool factor" with the Happy Time frame mounts that seem to attract more questions and comments.

There coming to take us away ho ho he he ha ha to the motoredbike farm! 8)
G


Nearly new 1979...the older gentleman I got it from said he only rode it around in his wood once in awhile.

The Crash Course for MotoredBike NOOBs
2 3 4