Anyone call your motoredbike a "Scooter"?

I hate it when people do that. ITS NOT A SCOOTER!

Scooters are not nearly as cool as motored bikes.
J


If I were a kid I'd ride just about any motor vehicle but as an adult I just think grown men riding mopeds/scooters looks to funny.

Just a plain motoredbike is way cooler by far and a custom bike motorized is even better.
J

YES! it's terrible, especially with a bike like mine.

I sometimes refer to mine as a "scooter"...sorry guys. I do, however, also refer to my Harley as my "scooter."
P

Been calling all my bikes "scooters" since the 70's including the latest. 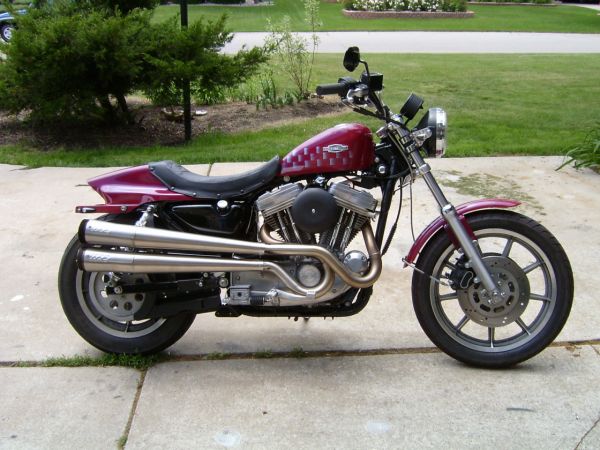 I hate it being called a scooter. my reason is 'word-association' memory triggers. every time i hear someone say that, a mental image of Fry (Futurama) pedaling his pink and yellow "Scootie-Puff Jr." flashes in my head.
B

You know, I find it interesting about word-association, too, but in the true sense of the word, a motorized or motor-assisted bicycle is a "moped." While most of you are much older than me, and remember a true moped as something different, the word literally means "motor pedal". One definition I found is: (noun) "a motorized bicycle that has pedals in addition to a low-powered gasoline engine designed for low-speed operation".

Now, a scooter is defined as:
(noun)
1. a child's vehicle that typically has two wheels with a low footboard between them, is steered by a handlebar, and is propelled by pushing one foot against the ground while resting the other on the footboard.
2. Also called motor scooter. a similar but larger and heavier vehicle for adults, having a saddlelike seat mounted on the footboard and being propelled by a motor.

When people call my bike a scooter, I quickly and firmly remind them of the above definitions, and make sure they understand it is NOT a scooter. Tom's right: scooters are just not nearly as cool as motored bikes!!
C

The mail lady called mine a WHAT THE HELL IS THAT!