I've been watching my younger brother tool around on his motorized bike for a couple years. My wife and son had visit to grandma's in San Diego coming up so I figured it would be a good time to give it a go. I'm a big guy (6'4", 285lbs) so this isn't the right toy to try to set a speed record on, but I figured I could put together a fun cruiser for pretty cheap.

I had an original budget of $300... but after carefully considering the potential safety issues of the bike, I decided on upgrading to a hub-sprocket setup vs the rag joint and I was none-too-thrilled with the stock tensioner (even the 4-bolt version). I had images of the damn thing falling in to my spokes running through my head and decided an arch-type tensioner was in order.

One thing I didn't like about both the Cranbrook and this Sea Change was the "coaster brake" only. I figured the coaster brake isn't that big of a deal so much as the lack of a front brake is. So I decided to pick up a set of handbrakes... next upgrade will be a single pull two-brake setup... hitting that front brake AND the clutch level is a little... tricky. 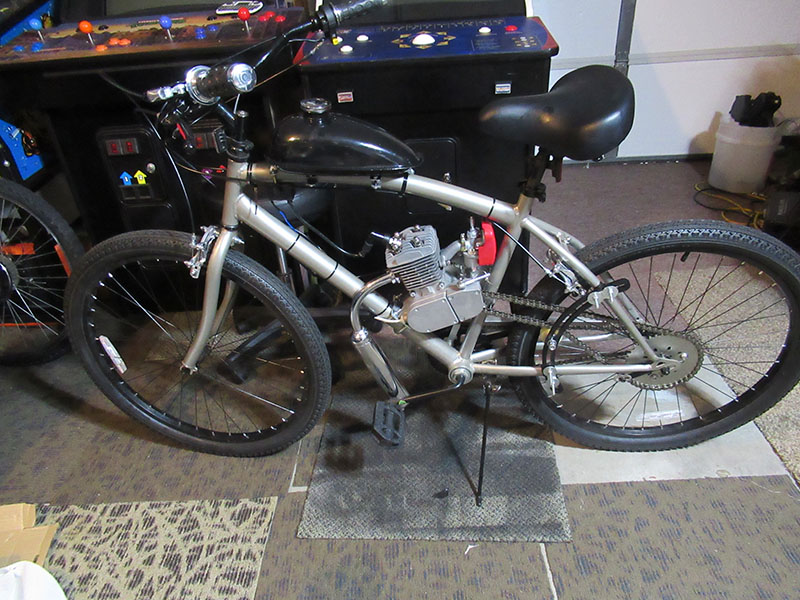 if you get that style kickstand, don't sit on your bike while it is holding up your bike. They are height adjustable and the rider weight will break the adjustment mechanism. Make sure no one else does either. I have two of those kickstands broken in my parts box.

Zak said:
if you get that style kickstand, don't sit on your bike while it is holding up your bike.
Click to expand...

Zak said:
Is the dieseling you are talking about the 4-stroking? I always thought dieseling was the engine still running after you shut it off. If you are 4-stroking that could be caused by a rich fuel mixture.

As for a bike rack for a car? Look for the weight rating. I could only assume that it would have to be receiver mounted and costs more than your bike.
Click to expand...

As for the rack , I mean a rack that will go on the back of the bike so that I can carry stuff on it.

Here's a photo of my Kent that I converted a little over a year ago. Like you, I right away put a front squeeze brake on it. Since this photo was taken I have also installed a rear squeeze on it. The coaster brake is still there but I'm careful to never use it. I still have the stock tensioner on this bike and it's never been a problem. Always checking it to make sure the bolts stay tight. The Kent has a shorter wheel base than my Huffy does and corners much better than the Huffy. But I'm an old fart and don't get crazy with it! I live in southeast AZ now, about 4500' and my needle clip is also in the top groove. Longer is leaner! LOL. 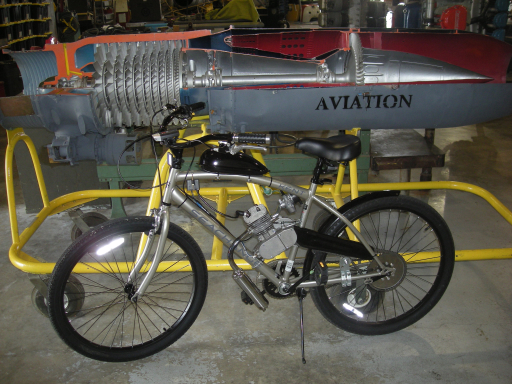 Have you had any issues with your back fender? I had both installed initially... but I decided on removing them. While I can give them plenty of space ... I dunno ... I've seen some pretty horrific looking "fender accident" photos.

Also, how do you like having the chain guard? I have one... but didn't install it... but I'm open to doing so.

One thing I noticed when I added the squeeze brake to the rear is that it wouldn't fit right (due to the angle of the cross brace) when installed in the "normal" position. I had to install the brake on the underside of the rear cross-brace rather than the topside.

FrizzleFried said:
As for the rack , I mean a rack that will go on the back of the bike so that I can carry stuff on it.
Click to expand...

Like the one I have on mine???...I know you cant see it very well in my pic, but as you can see it holds onto the rear bag as well as the baskets on each side of it...It's totally adjustable and adaptable to any bike. 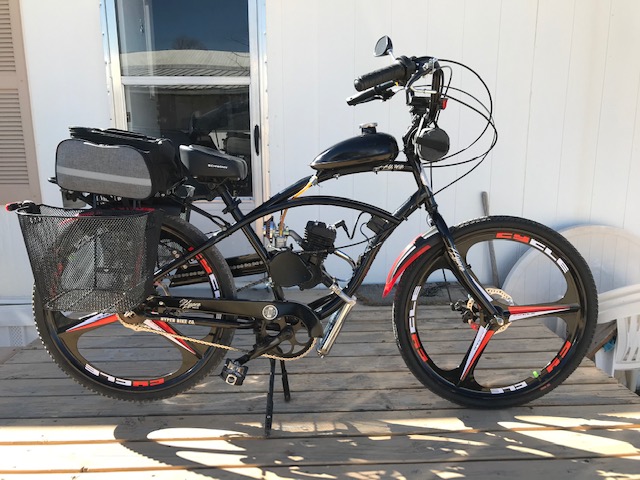 That looks perfect except that it appears that the top front supports either have to be drilled ... or? 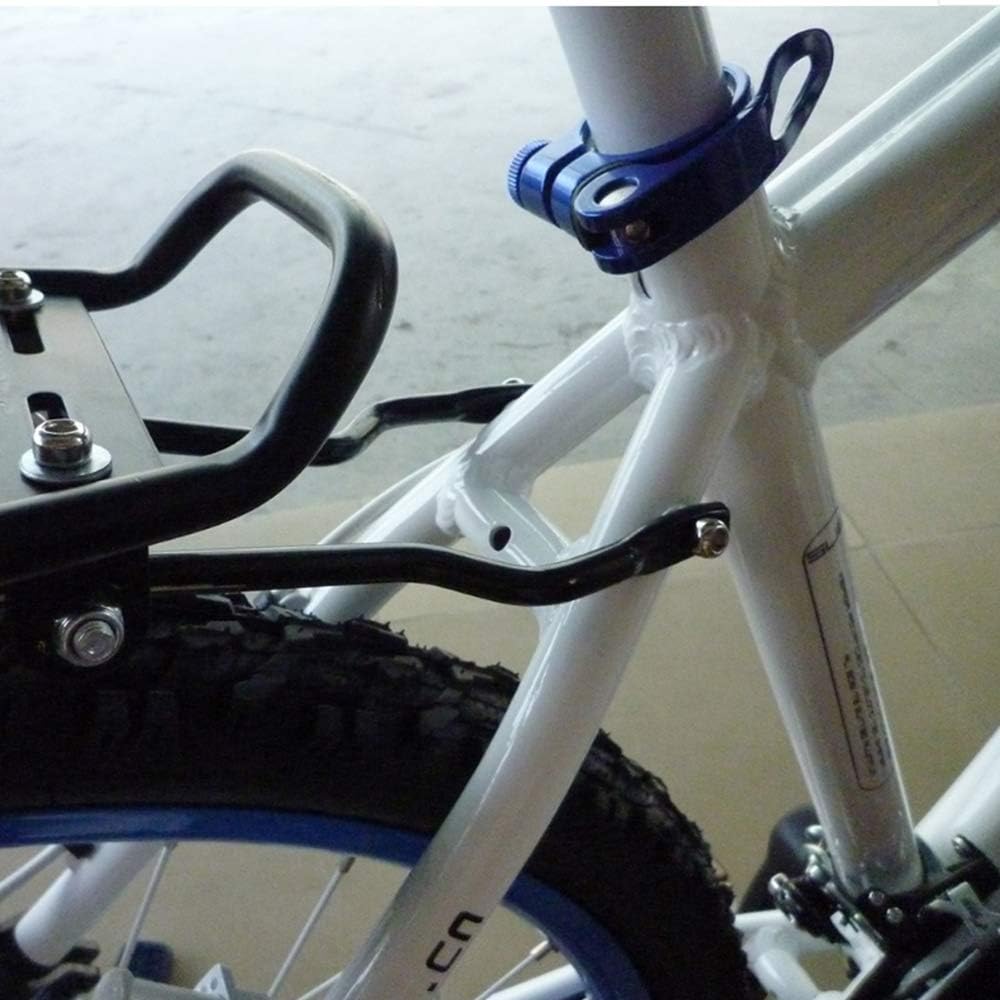 I do not believe I have any holes at that location currently.

EDIT: Though the description does say "5. Non-hole frame installation" ... perhaps it comes with some bracket?

FrizzleFried said:
Have you had any issues with your back fender? I had both installed initially... but I decided on removing them.
Click to expand...

Stock factory fenders, both front and rear are always a problem with these things as the vibration tends to fatigue the metal tabs that are screwed into place on the frame and they snap off causing horrific accidents...I replaced the metal ones with these plastic ones and they come and quite a few different colours end of problem...lol.

Ps...All I did with the front tab on the plastic ones is to reinforce the existing metal tab with plumbers strap...Its on like iron...lol...The rear one clamps to the seat post and has infinite adjustments to adjust height etc.

FrizzleFried said:
That looks perfect except that it appears that the top front supports either have to be drilled ... or?
Click to expand...

Nope...lol...All ends have clamps that attach to the frame...Absolutely no hole drilling involved....Thats why I chose this rear rack over all others.

Thanks! Cheaper than I was expecting too...