So I built a test model out of cardboard and stuck it on the bike its sealed via duct tape "the cardboard" it mounts on the intake. I notice I can go through the full powerband/speed in a harsh headwind that would otherwise drop my speed to 10mph or slower. I will be testing it tomorrow for sure when there is going to be 40mph winds with 60 gusts! YAHOOO!! it will be insane I am being very careful checking the plug for ashing to make sure its not going lean.

I sealed the leaks in the air intake so I was able to lean out the mix now the mix is rich again..

BTW what kinda damage can come from overrich?
L

hows about a photo
S

AYE! I will get a photo.

Here is the photo it may look crude but it seems to be working. 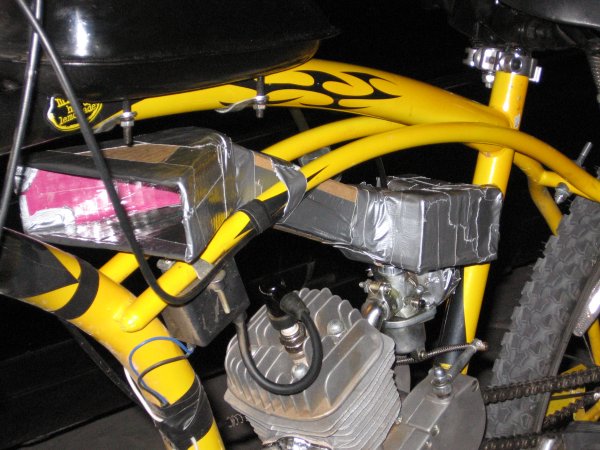 Cool I'll get the copy rights papers out
S

EDIT: I think its officially scared everybody now
S

I like it. I'm busy imagining how insanely cool that
same setup would be if it was made out of sheet
metal, held together by pop rivets, and painted to
match.

my brain is on overdrive
S

locoWelder said:
my brain is on overdrive
Click to expand...

At lower speeds the carb is just getting cooler air...by a bit.

At full speed it will deliver cooler air and lean the fuel just a tad because the flote bowl is not pressurized also.

If the whole carb were pressurized and the bicycle was going 70+mph, the gain might be in the lower single pecentage points.

In motorcycle testing the speeds had to be in the three figure range before any real benifit was seen. Kawi did ram air and most of the other Nipponese motorcycle builders followed suit. It all lasted several years. Now frontal air is sold as just providing cooler air for a small hp gain.

Or so I have read.


OH! I do like the yellow with black flames. Looks bumble bee-ish. Kewl!

J
Ram air does indeed effect pressure inside the case and contributes to top speed.
9 10 11

Evil minds never rest... I am building a forced air ram unit for my carb.
2

Bike only runs on hot start, dies with throttle
2