This is a bicycle I have owned for many years. I just thought it was one of the nicest bikes Schwinn put out. 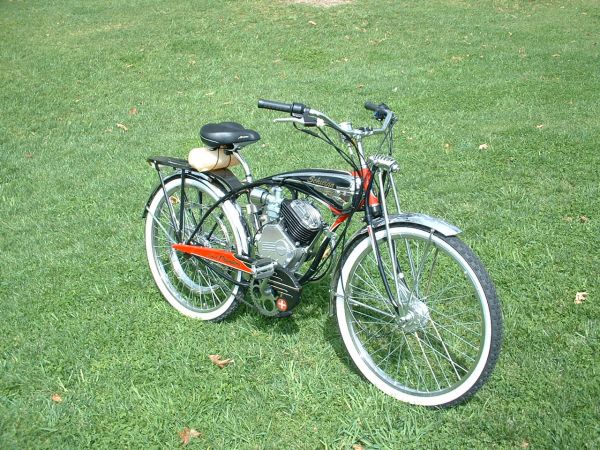 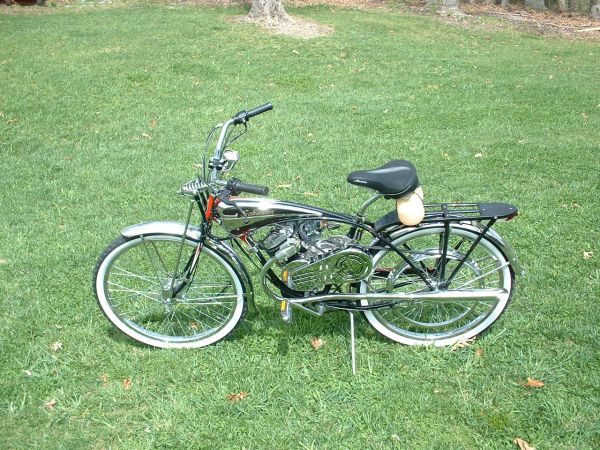 This will be the third motor I have put on it. Electric, then a MX-5 and now a new Whizzer engine.

It has a redesigned high compression head, high lift cam, ported and relieved and a larger 26mm carb.

The wheels have been relaced using Whizzer spokes,hubs and brakes but retaining the Black Phantom Rims.

I wanted to keep the Black Phantom Bicycle look and that's the reason for the gas tank under the seat.

Even with the mods done to the engine it starts very easy, runs and idles down smooth. It is capable of doing 65 - 68 mph. I have no intention of riding it that fast but quention has the same engine on his Whizzer and that's the speed he attains. I know, it's illegal as all get out but I keep the speed down so our police friends are not forced to pull me over. The power is mainly for hills. It does ride and handle very nice.


Sorry, did something wrong. Hope I make it this time with the pictures. This is normal for me doing it over again 2, 3 ,4 times until it get it right and sometimes never right

Bill Snow ( I think I got the name right).
Click to expand...
B
Written by

looks like it came from the factory that way !
very nice install
U

Bill Snow said:
This is a bicycle I have owned for many years. I just thought it was one of the nicest bikes Schwinn put out.

It has a redesigned high compression head, high lift cam, ported and relieved and a larger 26mm carb.
Click to expand...


Hi Bill,
Love your Phantom!!!
I'm currently putting a Quenton HiPo Whizzer on a 1950 DX Kustom to ride from Washington state to the Portland, Indiana VMBC meet in July...
Nice to see ya here.
Rif
B

I think you will like Quentions Engine when you finish, he does a real good job.

Would like to see pictures of your bike when finished.

That will be some ride and I have been told by Quention the VMBC meet is well worth attending. I am going to try and make it myself if all goes well. Maybe I'll see you there.

I really like the bike. are you gonna leave it as is or add the whizzer gas tank? I would leave it like it is, the tank behind the saddle could be covered in leather and it would look very appropriate. That way you perserve the original look of the schwionn.

Killer Bike! That frame is awesome and what a bad a** motor! And 65-68 MPH? I like EVERYTHING about this bike! Great job, man!
J

The front fender had a "streamlined" head light that used 2 - D cells, as did the horn in the tank. The fenders were chrome. The rear rack was black and had a tail light and brake light. Don't remember the arrangement of the tail light (two bulbs??) , but do remember the brake light was actuated by a wire C clip that rode in a grove cut in the rear coaster brake hub. It would ride in the grove most of the time (Lost several of them) with a tab of some kind which rocked back when you applied the brake. That tab closed a open contact switch which operated the bake light. 6 - D cells made for an expensive bike to ride and keep in batteries. )

The other thing was the weight. I rode my J C Higgins all over Phoenix and hardly ever put my hands on the handle bar. Not so with the Schwinn. A little body lean and the "Knee Action" front fork would over steer. So that ended my no hands riding. OBTW, It cost $115 in a time I think bikes were running $20 - $40. An other detail, it had whitewalls.

I rode it two miles to Adams School each day in the snow and ice and it was up hill both ways.


timmyP said:
I really like the bike. are you gonna leave it as is or add the whizzer gas tank? I would leave it like it is, the tank behind the saddle could be covered in leather and it would look very appropriate. That way you perserve the original look of the schwionn.[/QUOTE
Click to expand...

68 mph? NO THANKS I'm too old for that s***. If you've never been to our Outerbanks, with the exception of the tallest sand dune on the east coast at Jocky's Ridge, the banks are flat.

T
Zeda and Phantom break in

B
looking for info on a Ralph Westman N5
2